Courtesy of Meynard(Our Photo. maven).
Thank you,
Ron
P.S. Anybody can upload photos. See Formatting left frame. I'm also pestering Meynard to see if we can have a bigger photo. of ourselves.Meynard-- 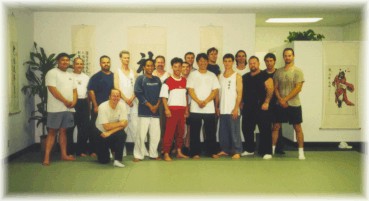 So how did the seminar(s) go? He seems to be teaching more at the seminars this year than previously. What were the participant's impressions?

I loved it! I wish I could've afforded to attend both days, but a Saturday full of Bagua was great.

Luo's English has improved a lot since last summer.

I'd have to say the highlight for me was sitting next to him while watching the new 'Planet Of The Apes' movie.

Here in Mass we had a great time! Luo Laoshi really did teach to a higher level this year and gave us all we could handle. I'm looking to forward to having him back again next year. Oh yes then there was the lobster and all that wine
%^)
Buddy

I had a great time learning from him. I wish I could have made Saturday's Ba Gua session, but I was tied up. I only got to do Hsing-I on Sunday, but got a lot out of it.

Luo is very quick for a man of his size, and projects a lot of power, too. His Hsing-I moves are a lot "bigger" (really broad and sweeping)than I've seen before, and I learned quite a bit from watching him put them together at speed. Really cool...

He also showed us some deceptive stuff like advances that look to the opponent like retreats, and some angular attacking that is very confusing when you're trying to figure out where it's coming from. Showed us some new (to me, anyway) blocking techniques, too.

I'm really looking forward to him coming again next year.

Lou always puts on a good seminar, and they get better each time. I'd encourage everyone that hasn't attended one of Luo's seminars to go.

About five years ago, a friend order a series of ba qua videos taught by Lo. I can't remember where he ordered them from and my friend has since relocated. Is anyone familiar with those videos, and if so, how might I order them?

I'm fairly certain Plumflower Press still has them, although Luo's contract rights may have expired, depriving him of any profits.

Wayfarer Publications also has them (www.tai-chi.com).

Walter and Tom, Thanks for the responses. I had the opportunity to attend a ba gua seminar given by Mark Brinkman (ca. 1994) in Tallahassee, Fl. At the time, I really didn't grasp what he was teaching. My goju istructor, who had some experience in the internals, suggested that our class attend. Since then, I have not studied any form of martial arts, but I am interested in pursuing ba gua mainly for health reasons and its fluidity. I don't know of any ba gua teachers in the area, though I do know of a fairly reputable tai chi and hsing-I teacher in the area. But I thought I would view Luo's tapes and maybe attend a few tai chi classes in the interim.

Sorry, my lack of respone is because I don't know any teachers in that area. Tim would have a better sense, especially of anyone associated with Luo. There are several websites with listings of internal teachers. I didn't respond with this information earlier because I thought you wanted personal knowledge, but you may give that avenue a try.
Best wishes for finding a qualified teacher, it may actually be one of the hardest but most important steps in your training, so be patient.

Kenya;
there's an taichi man listed in the current issue of taichi magazine. He's in jacksonville fla.
He is sponsering an chen seminar there sometime soon so you may want to call or write him.
I lived in jax fla for 15 yrs so if you decide to go I could help you with finding stuff there
most likely.This person may know of any bagua
people there. I was the only one there for the
whole time I lived there as far as I know.
But this may have changed.So look and see.

thanks a bunch, you guys
k

Tim,
Does Lou Loshir ever do anything on the east coast
say the D.C. area?

Michael,
If you go to www.emptyflower.com and look on the discussion board, there is a thread with Lo's seminar schedule.